In 1952 the first protected landscape area of Hungary was created in the most attractive, most varied and scientifically best researched area of the country. It covers 1, 562 hectares, of which 195 is highly protected. The staff of the Hungarian Balaton Limnological Research Institute - founded in 1927 in Tihany - not only studied the biology of the lake, but also did extensive research on the peninsula of Tihany. As a result, hundreds of publications have dealt with its geology, fauna and flora. All the research supported the idea of granting protection to this area. 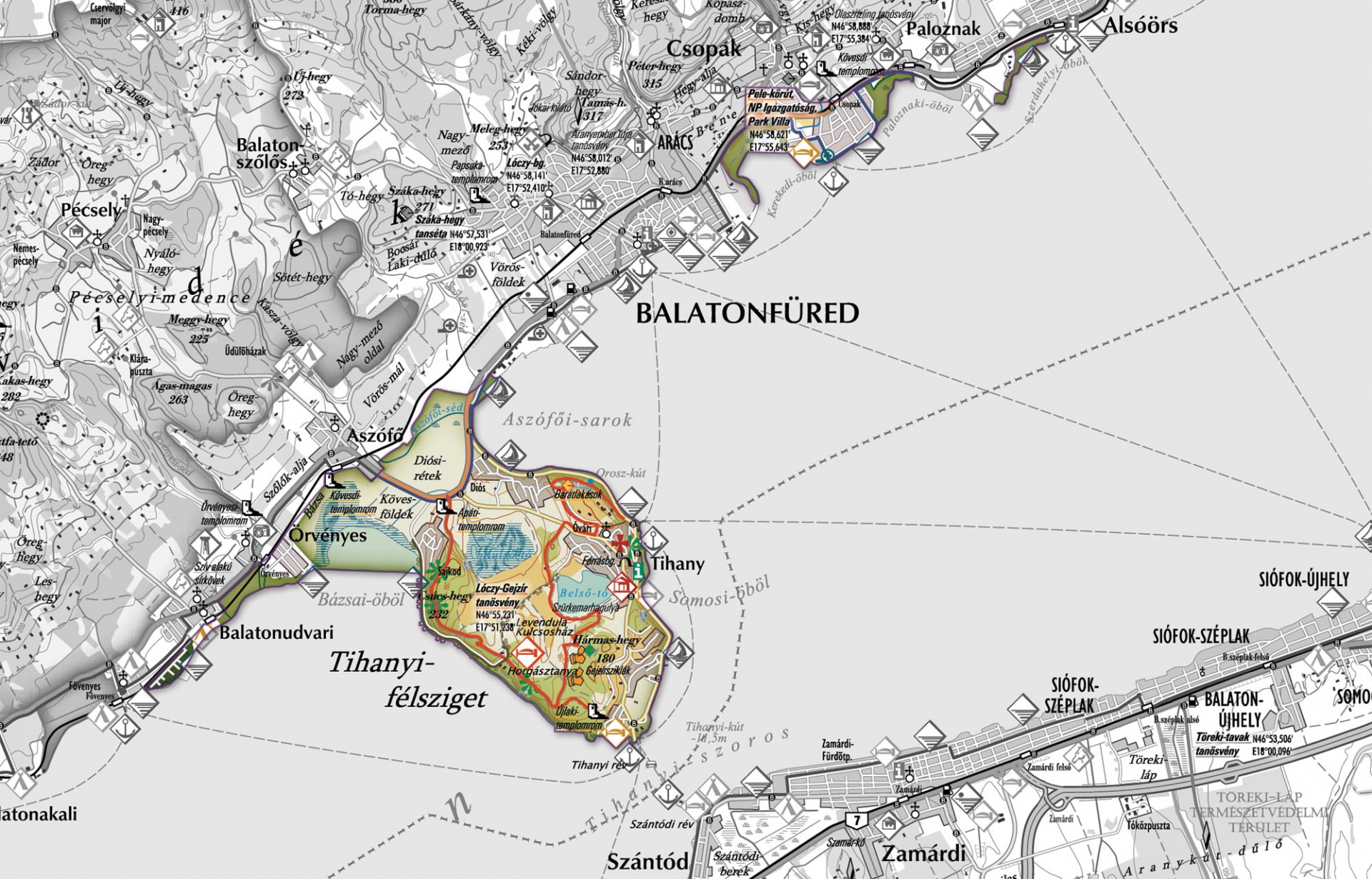 The geological scenery, the varied landscape of the peninsula is an attraction to visitors throughout the year. Two lakes increase the beauty of the hillsides and mountains covered with vineyards and forests. The open surface of the Inner Lake is 25 m above the level of the Balaton and is surrounded by geyser cones from the south. The geyser cones came into being after the volcanic activities in the area stopped, whilst hot waters regularly spurting forth created characteristic travertine and hydroquartzite formations. The most remarkable of these is the Golden House geyser cone, which received its name from the yellow lichen covering it. A typical spring cave is found right beneath the Abbey and at Csúcs Hill.
The unique geological value of the Tihany peninsula is its complete Upper Pannonian sequence rich in fossils. Its most famous fossil is the "goat hoof", a petrified Congeria shell. These shells, once so common, are also recalled by a local legend and a poem of János Garay. The various stages of the erosion of basaltic tuff can be studied on the Kiserdő Peak.
The rare, valuable species of the fauna and flora are present here as a result of the mild, Mediterranean-like climate. The arid forests of oak, ash and sumac are especially picturesque in autumn. One of the rare nesting birds of the peninsula is the horned sparrow owl, and in summer nights we can often hear the loud call of the cicada and the balm-cricket living in these forests.
We find several rare, protected submediterranean plants (Sternbergia colchiciflora, Scilla autumnalis) in the grassy steppes of Tihany. Spontaneous forest development started on the ancient Pannon grasslands that were extensively used for grazing before. This may be clearly observed on the side of the Csúcs Hill. In 1990 a thatched sheep-barn, fitting in with the surroundings, was built on the hillside. The sheep kept here help nature conservationists to restore the pastures that had been neglected for so long.
The area is especially rich in insects prefering the warmer climate: over 1,000 species have been identified. 800 butterflies occur here, some of them are extremely rare (ruly tiger, red underwing, looper). We find an interesting fauna of bees and wasps on the steep sand-clay slopes descending towards the lake, such as the turret wasp, Plopeus destillatorium, Podolirius parietinus.
Historic relics of the peninsula are also outstanding. Tihany is one of the sacred places of Hungary. The Baroque complex of buildings of the Monastery of the Benedictine Order, established by King Andrew I in 1055, crown the picturesque village. Its undercroft carved into the tuff, includes the tomb of the king as well. Before the 18th century a fortress used to stand on the site of the present monastery, it was never occupied by the invading Turkish army.
Now some old houses of the ancient fishing village serve as a village museum, preserving the relics of the popular 19th century architecture of the Balaton Uplands. The medieval homes of the monks can still be found on the steep slope of Óvár Hill facing lake Balaton. The monks, who probably came from Kiev, used to live here in their "lawras": caves centuries. They belonged to the Orthodox Church, and according to contemporary charters, the cluster of cavities was called "St. Nicholas Hermitage of Oroszkő". The old homes of the friars were in a ruinous condition, so the Directorate had the caves restored in 1993. 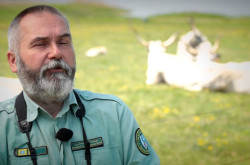 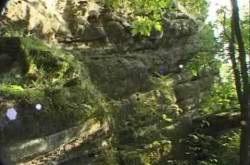 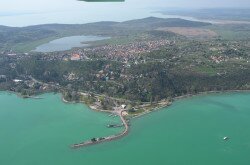 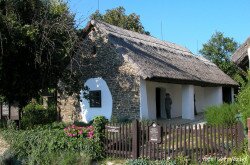 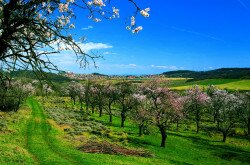 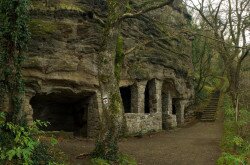 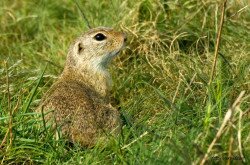 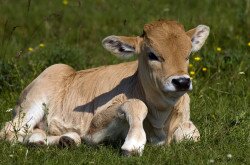 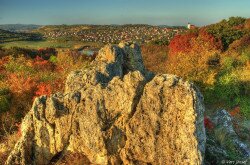 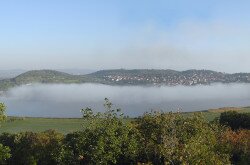 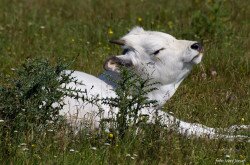 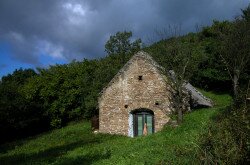 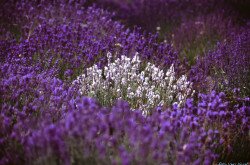 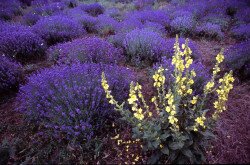 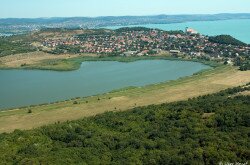 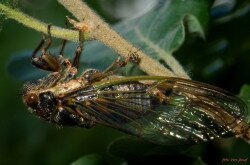 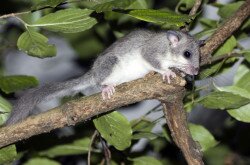 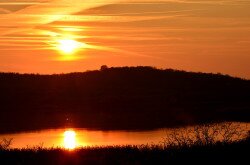 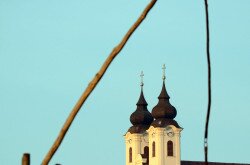 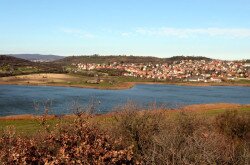 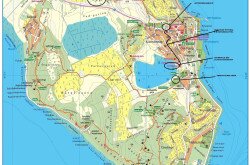 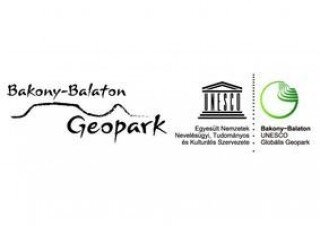 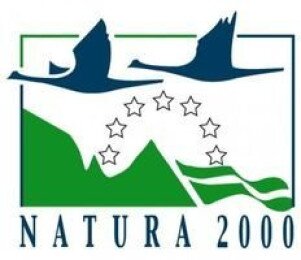 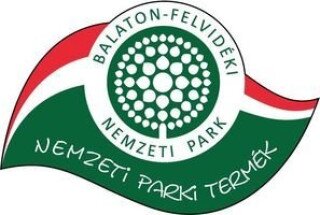 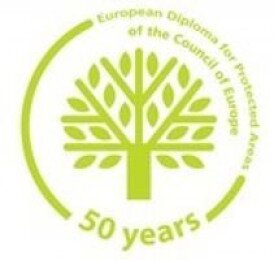 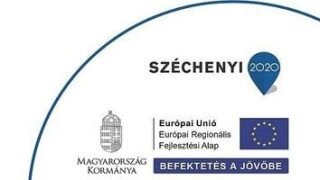 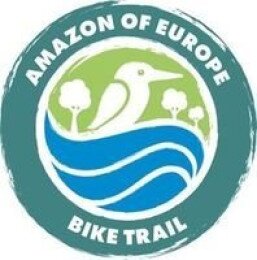