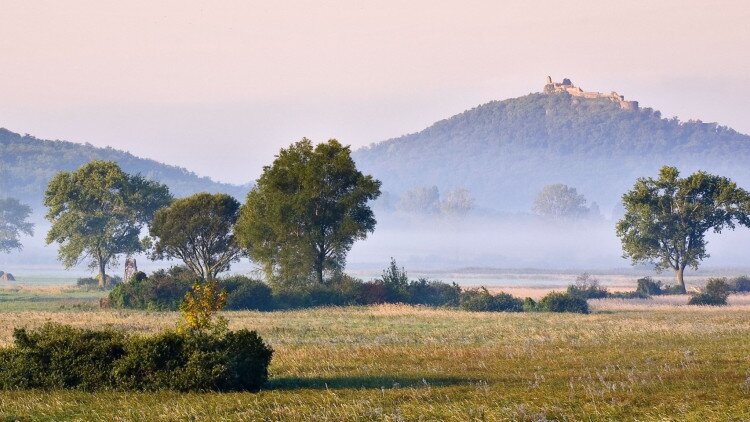 The region of Lake Balaton touches visitors not only with its sights, but also with its beauty, romance, colours changing in every season and atmosphere. Sloping areas, steep hills, gently and narrow valleys and higher plateaus follow one another in the area. Naturally, the natural condition which is primarily responsible for the character of the area has always been the water of the lake where the water fauna and holiday makers are in perfect symbiosis.

The shores of Lake Balaton have mostly been built up, thus they are less important for environmental protection. The excessive building up and the touristic developments resulted in the fact that a significant part of the reedy, sedgy and grassy areas near the shores, which play an important role in environmental protection, has been destroyed. The value of areas with existing, natural vegetation arranged like mosaics has risen and their conservation, as well as their restoration at some spots, are important tasks.

In accordance with the order 36/1997 (XII. 8.) of the Ministry of Environment, the scope of authority of the Directorate extends to Veszprém and Zala counties, some parts of the nature conservation area of Little Balaton stretching over to Somogy county and the areas of the Balaton Holiday Area in Somogy county since the beginning of 2004, amounting to a total of 950.000 ha. At present about 10% of this area is under official protection.

Environmental protection in Hungary has made its significant initial steps in the area of Lake Balaton. In spite of the fact that there is a unque symbiosis in the area of Little Balaton, it was a settled affair that its water would be drained as early as the beginning of the 1900s. Jakab Schrenk asked for help from abroad for the sake of saving this area: he called the chairmen of the International Committee of Bird Protection and the Dutch Associaton of Bird Protection to the scene, however, their efforts also ended in failure. In the spring of 1922, at the meeting of the Little Balaton Water Drainage Association the chairman of the association, Miksa Kroller, the abbot of Zalavár, said the following: "Gentlemen, you might as well jump to the skies, we are going to drain Little Balaton anyway!" After this, bird protectionists focused on the protection of the egret. A collection started in the Netherlands for saving the egret of Little Balaton and the donations amounted to 68.936,- crowns. 14.130,- crowns were gathered by the collections organized in Hungary. Based on this amount, József Gulyás, the famous master fisherman of Little Balaton, who knew every nook and cranny of the marshy pasture, was employed as an egret guard. He was the first paid guard of environmental protection in Hungary. He fulfilled his duty until 1945. Almost three decades had passed after 1922 until this habitat of the birds was declared protected (10th January, 1946).

The Tapolca Cave with its underground lake became protected before this date, in 1942. The cave is particularly protected due to its unique value and thousands of people visit it to make themselves familiar with the process of karsting. "Lukewarm water" rushing up from the deep mixes with the cold karst water near the surface and dissolves smaller and larger cavities and hollows in the miocene-aged limestone. In the course of time they formed maze-like passages and halls along the fault-lines and layers. Besides the Tapolca Cave other cavities were excavated by explorers, for the 'rock is hollow' under the town at several places. The similarly protected neighbouring Hospital Cave was also utilized for health purposes: its sterile air rich in calcium ions is used for treating respiratory diseases.

The Balaton-Uplands National Park was the 8th among the Hungarian national parks to be opened, in spite of the fact that an interpellation was made in the Parliament as early as the 1940s for the sake of declaring one of its regions - the Tihany Peninsula - the first national park in Hungary. The dream of georgrapher Jenő Cholnoky was only partially realized in 1952, when on this territory measuring nearly 10 km2 the first landscape protection area of Hungary was opened. Besides the monuments of the peninsula, it is famous mainly for it formations of volcanic origin. As an after-effect of million-year old volcano activities, hot water rushed up to the surface and the rocks (geyserite) depositing from the limy-siliceous solutions produced more than a hundred thermal cones. The weird-shaped rock chimney-rocks of post-vulcanic origin arising from their surroundings are the world-famous sights of Tihany today. The most famous geyser cone of the peninsula is the so-called Golden House near the Inner Lake, which was named after the yellow lichen covering the rock. Due to the favourable climatic conditions of this habitat, it has a rich fauna and flora. The mediterranean effects can be observed not only in some plant species but the colourful shrub fields echoing with the chorus of the cicadae also create a mediterranean atmosphere. This diversification and the results of the half-a-century-old protection were honoured - as the third settlement in Hungary to be awarded - with the European Diploma by the Council of Europe on 1st July 2003.

After the Tihany Peninsula, Mt. Badacsony became the second landscape protection area of the Balaton Uplands in 1968. When also the last stone-cart stopped in the quarry in Badacsonytomaj and the continuous destruction of the mountain, which had started in 1902, stopped, the area was brought under official protection. The mines of Mt. Gulácsa and Tóti were closed down at the end of World War II and in the 1950s. Fortunately, the basalt of Mt. Szentgyörgy and Csobánc were just partly suitable for exploitation, thus only so-called 'pocket-mines' were opened on their slopes, which did not cause so heavy wounds to the landscape. One of the greatest results of Hungarian environmental protection was the closing of the basalt mines on these unique monadnocks. The wounds caused by surface mining could not be perfectly healed even by the sacrifying reforestation activities done by silviculture. The mountains of the basin offer a magnificient sight with the old cellars, small churches, castle ruins and viticulture on their 'skirts'. The 'basalt organs', which are the column-like fragments of the edges of the basalt mountains, are famous all over the world.

Enviromental protection gained its next triumph by having the habitat of the Tatarican Colewort in Balatonkenese declared protected in 1971. This decorative, robust plant of the uplands revealing the sediments of the Pannonian sea was already known in Hungary in the 1600s. The Tatarican Colewort is a 'cruciferous plant with a thick, patulously branching stalk, carnose, large, manifold divided leaves, a number of honey-scented flowers and a huge root trunk that is often as thick as a human thigh, carrot-shaped and stretches down the soil deeper than a metre'. This root was consumed roasted, instead of bread in poverty-stricken years. It is supposed that the Tartars taught the Hungarians how to use this root, which gives an explanation to the latin name of the Tatarican Colewort (Crambe tatarice).

After 1980s, following the establishment of the National Environmental Protection Office, the valuable regions were declared protected one after another. The insecurity of natural sights, intensive agricultural activities, surface mining and the large demand for building permits on the Balaton Uplands gave reasons for this.

In the Káli Basin a landscape-protection area measuring 9111 hectares was, probably at the last moment, established in 1984. There are extremely varied geological conditions with the most famous formations, the 'stone seas'. The various types of rock making up the sediment of the stone seas are composed of white or grey, siliceous, gritty sandstone. The fine- and rough-grained sediment layers of irregular thickness alternate with each other. The formation of the present terrain was dominated by the activities of the wind and the erosion of the water. At the beginning of the 1900s almost the entire basin was surrounded by a chain of rock seas, however, due to the mining activities once carried out in this region you can find rock seas only at some spots (sandstone was mined for making millstones). The rock field of Szentbékálla is perhaps the most beautiful which can be seen in its original form. The distinguished botanical value of the region is given by the marsh fields among which the Sásdi Field preserves the only bird's-eye primrose population of Hungary. This plant well deserves to have become a part of the emblem of the Balaton-Uplands National Park. The villages of the basin, the cellars of its vineyards offer a special atmosphere of the landscape. The settlements situated here have preserved the former village atmosphere better than the villages of other regions. Since it was declared protected, with the help of environmental protection the local governments have been able to take control of the preservation of the architectural values of the region better.

The Keszthely Mountains became protected in two phases. The beech-grove on the lower basalt cone of Mt. Tátika mixed with 200-210-year-old yoke-elms, high ash-trees and common oaks became protected early, in 1953, while the landscape-protection area itself was established in the Keszthely Mountains in 1984. The typical fundamental rock of the area covered almost entirely with woods is the dolomite. Besides the stone booths, various rock formations and canyons, in the row of geological sights we could mention several caves under exploration in the eastern limestony areas, including the 'Wonder-berry Cave' which could take pride in stalactites as well. These caves are available only for scientists. The greatest botanical treasures of the area are the eastern doronicum and the bear's ear, however you can frequently come across various orchid species.

With its date of 1st August 1997 the Pécsely Basin was the last among the regions of the Balaton Uplands to be declared protected. The Eranthis Landscape Protection Area of Aszófő, which also belongs to the basin, became officially protected in 1987. Gently sloping hills, wide valleys and flat uplands - some of them have karst formations (e.g. kars) - are typical of the region. The century-old forms of farming in harmony with nature, vineyards, orchards, fields and pastures alternate with woods preserving ancient fauna and flora, dry grassy areas and marshland where everybody, be it a simple tourist or an expert botanist-zoologist, can find beauty and curiosity.

The Directorate of the Balaton-Uplands National Park, to which belong the High-Bakony and the Somló Landscape Protection Areas as well as 25 smaller nature conservation areas in the three counties, was established on 23rd September 1997 to safeguard the natural and culture-historical values of the Balaton Uplands. Its field of activity has been significantly expanded since 1st January 2004. Thus it covers Veszprém and Zala counties, the whole administrative area of 5 settlements in Győr-Sopron county, the settlements in the Distinguished Balaton Holiday Areas in Somogy county, except for the whole administrative area of Marcali. The 110.000-hectare area which has been transferred from the Directorate of the Danube-Drava National Park includes several protected (the Nagyberek-White Water, the Látrány Plane and the Somogyvár-Mt. Kapavár nature reservation areas) areas and regions to be protected.

The tourist paths, educational paths and demonstration places of environmental protection offer unforgettable tour opportunities on the territory of the National Park for the interested. Professional guides are available at the Directorate of the National Park. 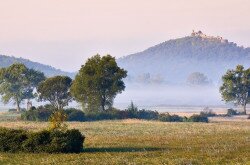